An introduction to the China-Pakistan Economic Corridor 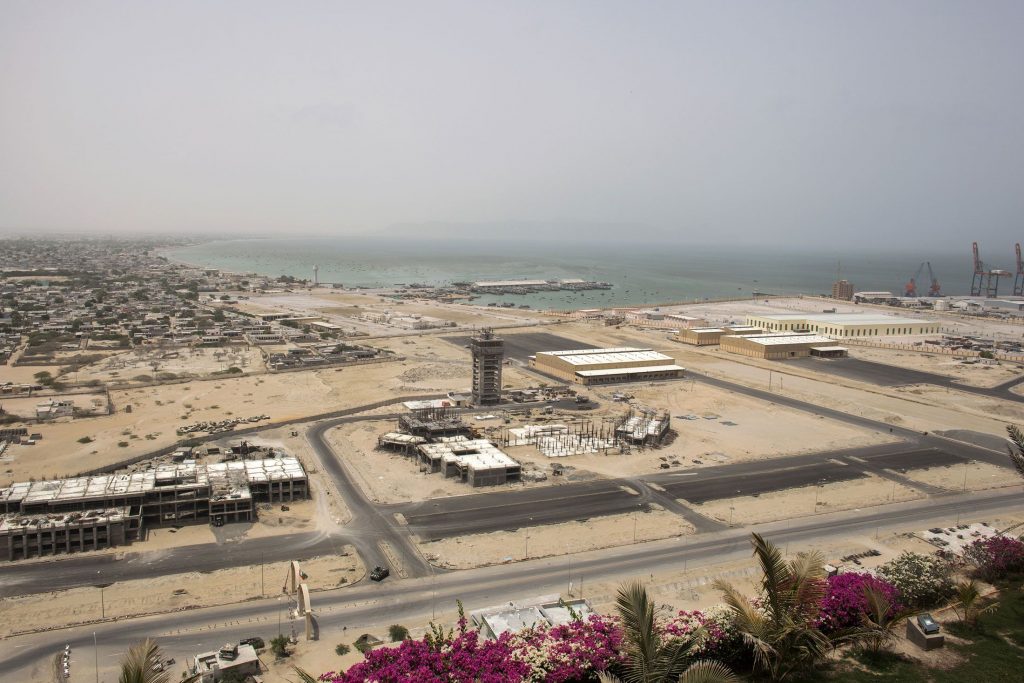 While initial plans for the China-Pakistan Economic Corridor (CPEC) predate those of OBOR it has been given renewed impetus under it and has come to be described as a flagship OBOR project. Along with the Bangladesh-China-India-Myanmar Economic Corridor, the CPEC receives specific mention in the National Development and Reform Commision’s 2015 OBOR Vision and Action document. The corridor, which involves a series of infrastructure projects linking the two countries, runs for 3,000 kilometres from Kashgar in western China to the port of Gwadar in Pakistan. Along the corridor huge infrastructure projects, including roads, railways and power plants and an optical cable fibre network are either being built or planned to be built which are largely funded by Chinese capital and loans. The value of the corridor is currently estimated to be US$62 billion.[1]

Details of the 231 page document developed by the China Development Bank and the National Development Reform Commission of the PRC in 2015 on the Long Term Plan for the CPEC were leaked by Pakistan newspaper the Dawn in May 2017. Significantly, one important point highlighted by the Dawn report on the plan is how despite infrastructure project such as roads and power plants being some of the most common associations with the CPEC, the plan contains greater detail concerning agriculture projects suggesting that it is an additional key priority. This includes many different aspects of agriculture from provision of seeds, fertilizer and pesticides, operation of farms and processing facilities by Chinese enterprises, to logistics companies operating storage and transportation for agricultural produce. It also seeks to make use of work of the Xinjiang Production and Construction Corps, a state owned enterprise and paramilitary organization, to introduce mechanization, scientific techniques for livestock breeding, development of hybrid varieties and precision irrigation to Pakistan. In addition to profitable opportunities for Chinese enterprises, the plan also places emphasis on opportunities for the Kashgar Prefecture within the Xinjiang Autonomous Zone.[2] As an underdeveloped region in China, the plan therefore seems to suggest that China intends the CPEC to aid in its development strategy there.

Another important component of the CPEC is the Gwadar port, a deep water sea port, which lies at the end of the corridor and which although owned by the Pakistan government is being operated by Chinese state-owned China Overseas Port Holding Company (COPHC). The port was originally jointly developed by the Pakistan and Chinese government and inaugurated in March 2007, however control was then handed to the Port of Singapore Authority (PSA) under a 40 year concession agreement. In 2013, reportedly following the failure of the PSA to expand business, lack of agreed investment by the PSA due to security concerns in the region and the Pakistan Navy’s failure to transfer land for the development of a free trade zone, the concessional rights were transferred back to COPHC. A second phase of the port’s construction is now underway as part of the CPEC. This second phase of expansion involves an expected $1.02 billion dollars of contracts and involves the construction of nine new multipurpose berths and other expansions to port infrastructure. This expansion is being financed by loans from China’s state owned banks.

Why is the port important? The location of the port is strategically significant. Gwadar is located near to the Persian/Arabian gulf and the Strait of Hormuz, through which significant percentages of the world’s petroleum passes, and it has been suggested that the port will allow China to benefit from the shorter transportation route for the transportation of oil and gas from gulf countries. This is something which some Chinese media has attempted to downplay, claiming that benefit to China may be limited due to the size of the port when compared to China’s demand for petroleum imports, and instead emphasizing the development opportunities for Pakistan[3]. Nevertheless given concerns over energy security and the fact that its key existing route for the transportation of oil imports , the Straits of Malacca through which 80% of its oil are imported, are frequently patrolled by the US and have the potential to be affected by territorial disputes in the South China Sea and there is also increased surveillance by the Malacca Straits by India as it becomes more concerned about China’s String of Pearls, the Gwadar port is therefore very strategic as it has the potential to circumvent this problem if China’s energy imports are threatened thereby also potentially reducing the likelihood of conflict between the US and China. Indeed there are further geopolitical implications associated with closer China-Pakistan relations and OBOR, as the CPEC itself has also been an additional source of tension with India due to territorial disputes in the region which the corridor passes through.

A lot of the initial cargo handled by the newly expanded port is expected to consist of construction materials for other CPEC projects. However, current projected traffic for the port is far below original expectations in part because the roads that the CPEC is expected to build to link it to industrial zones in China are not yet constructed[4]. A free trade zone is also being established in conjunction with the expanded port. In late 2015 COPHC leased 650 acres of land to build and operate the free trade zone (as part of a total of 2,2,81 acres that Pakistan will eventually provide to the company as part of this zone. The Gwadar Free Trade Zone will provide an entry point for Chinese companies and products to enter Pakistan and in April 2016, COPHC chairperson, Zhang Bozhong, said that the company would commit US$4.5 billion to roads, power, hotel and infrastructure for the zone[5].

The impacts of the CPEC

Overall, if it goes ahead as planned and is not too adversely affected by security issues and local government delaying or restricting implementation, the CPEC therefore presents opportunities to benefit China in the sense that it advances the interests and opportunities of Chinese capital as well as China’s geopolitical influence more broadly. As far as Pakistan is concerned the picture is less clear. Despite the emphasis on the potential benefits to Pakistan, promoted by both the Chinese and Pakistan governments of the CPEC, the project has first of all been criticized for the economic risks that it carries to Pakistan, and that it may risks leaving Pakistan trapped in debt and dependency on China, as has become the case in some other countries such as Tajikistan[6]. According to the IMF, the CPEC project carries with it potentially serious repayment obligations for Pakistan on loans from Chinese banks. Such repayments are expected to rise after 2021 and, along with profit repatriation by Chinese investors, have the potential to be a burden if growth generated by the CPEC is not enough to cover them, something which is far from guaranteed.[7]

The CPEC has received a lot of criticism inside of Pakistan, both from those with nationalist perspectives and from across the political spectrum from those raising genuine concerns about the adverse impacts on ordinary people. Protests have occurred in some regions against the way that the CPEC is being implemented by both the Pakistan government and China[8], with some reportedly opposed to “Chinese imperialism”. Although some have suggested that CPEC may potentially improve Pakistan’s economic growth and have positive outcomes, for instance through allowing producers (such as fruit growers) from Pakistan to sell produce more easily in China, concerns have also been raised that in reality impacts may bring few benefits to locals and act as a drain on their resources. Fears both of displacement and destruction of farmlands from which people make their livings represent key concerns[9]. Around the Gwadar port there are also concerns about the impact on the livelihoods of local fishermen and their potential displacement to locations with inadequate amenities and facilities to accommodate all of them so that they can maintain their current incomes.[10] Meanwhile Gwadar city has also been suffering from a growing water crisis which has left thousands without access to clean drinking water, as increasing investment has put additional strain on the water resources that do exist[11]. Some critics have also observed that where the project has been presented as providing benefits in terms of local job creation may not amount to so much if existing examples of Chinese investment in Pakistan are considered since many of these largely rely on skilled labour imported from China[12].

As far as the environment is concerned, the construction of new coal power stations as a part of the CPEC has been another reason for criticism of the CPEC. Although CPEC is often promoted as a way to help aid Pakistan’s power problems, the way that this is done and the type of power invested in might be seen as problematic. In another sign that the Chinese and Pakistan governments are prioritizing CPEC investment projects over environmental sustainability, in 2016 when the Pakistan government imposed a ban on new power plants which would make use of imported coal, projects mutually agreed by China and Pakistan or finalized under the CPEC were reported to be exempt[13]. Another issue involves the destruction of farmland and fragile ecosystems to make way for the CPEC. Although new trees are being planted, tens of thousands of mature trees have already reportedly been cut down from forests across Pakistan in preparation for the construction of the Raikot-Islamabad highway, with the Pakistan Environmental Protection Agency rejecting the initial Environmental Impact Assessment on the grounds that it was unprofessional and lacked information about environmental costs.[14]

Concerning all of these issues, a key complaint that has only heightened local fears relates to the lack of transparency in the way that the project is being carried out. In this respect both Pakistan and the Chinese governments have been criticized for failing to be transparent enough, and makes full analysis of some of the likely costs and debts incurred to very difficult. According to the Dawn newspaper, the only provincial level Pakistan government to receive a copy of the full version of China’s long term plan for the CPEC was the Punjab government, with other provincial governments only receiving a 30 page shortened summary version which only highlighted “areas of cooperation” and did not provide details. Again, in addition to the details for the plan and the economic impacts, further concern has also been raised over government measures to adequately monitor and report the impact on the environment. The fact that such an extensive project which potentially has significant (adverse) impacts on Pakistan and the lives of people living there is being implemented without proper disclosure and consultation involving the peoples whose lives it effects is another reason to call China’s OBOR strategy into question.