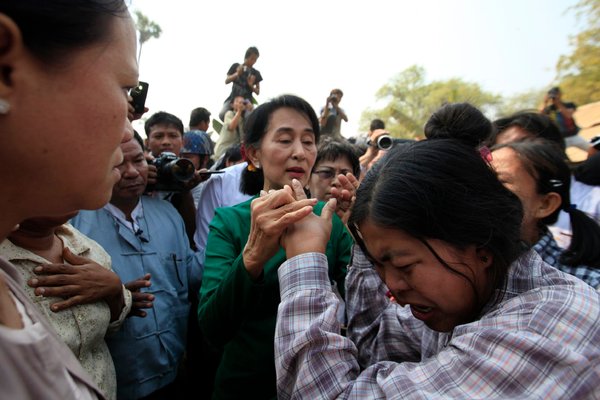 Daw Aung San Suu Kyi, the Burmese politician and Nobel laureate, visited villages in central Myanmar on Thursday that might be displaced by a copper mine and also toured the project.

YANGON, Myanmar — Hundreds of angry farmers heckled and walked out on Daw Aung San Suu Kyi, the Burmese politician and Nobel laureate, during a visit on Thursday to villages in central Myanmar that might be displaced by a copper mine.

The Burmese politician Daw Aung San Suu Kyi, right, received a hostile reception as she visited villagers that might be displaced by a copper mine.

Ms. Aung San Suu Kyi with a Buddhist monk. An attempt in November by the government to disperse protesters from the mine backfired when dozens of Buddhist monks, revered in Myanmar, were severely burned by smoke grenades deployed by the police.

To counter the uproar, President Thein Sein appointed Ms. Aung San Suu Kyi to lead an official investigation into the mine and the episode.

The hostile reception, a stark contrast to the adoring crowds that greeted her after her release from house arrest more than two years ago, underscores the rockiness of her transition from international symbol to elected official.

Frustration with her has been building from groups in the country who say she often sides with the establishment, including the powerful military, that held her for most of two decades and brutalized the country for five.

“All we had to eat was boiled rice when we voted for you,” said Daw Pu, a farmer who confronted Ms. Aung San Suu Kyi on Thursday. “But you are not standing with us anymore.”

Significant in a country where ethnicity normally carries major weight, the villagers were from her own ethnic group, the majority Burman.

They have been protesting the expansion of the mine, which would force them off their land. Ms. Aung San Suu Kyi traveled to the area in an attempt to convince the farmers to cease their protests and make way for the mine, which is partly owned by the Myanmar military.

Ms. Aung San Suu Kyi, he wrote, “can no longer count on Burma’s people to believe her when she says that everything she does is in their best interests.”

Ms. Aung San Suu Kyi remains widely admired in the country, formerly known as Burma, for her stubborn campaign against military rule and her sacrifices during her years of house arrest. But in recent months she has alienated some supporters with public expressions of admiration for the military and silence on the army’s shelling and airstrikes against the Kachin ethnic minority group.

The dispute over the copper mine centers on an unresolved but crucial question for the country: how to handle the legacy of five decades of military dictatorship.

No one has been held accountable for the sins of the past: the bloody crackdowns on protesters, the jailing of dissidents and the ruinous economic management by the military, including many business deals signed in secrecy.

The mine is run by a joint venture, formed in 2010, between the Myanmar military and a subsidiary of a Chinese arms manufacturer. Its expansion will bury surrounding villages and rice paddies with mine tailings.

The standoff over the mine has attracted national attention partly because it has come to symbolize widespread land seizures in Myanmar. The issue, a major problem for the civilian government of President Thein Sein, pits destitute farmers against powerful interests, including the military and their favored businessmen.

An attempt in November by the government to disperse protesters from the mine, which is outside the central city of Monywa, backfired when dozens of Buddhist monks, revered in this country, were severely burned by white phosphorus smoke grenades deployed by the police. The devices are normally reserved for warfare, not riot control.

The news media in Myanmar was filled with images of the monks’ injuries.

To counter the uproar, President Thein Sein appointed Ms. Aung San Suu Kyi to lead an official investigation into the mine and the episode.

Her findings were released Tuesday. Infuriating the villagers, the report did not hold anyone responsible for using the phosphorus devices but recommended better training for riot control. It said that the copper mine expansion should proceed, but that the joint venture company should offer more compensation.

Before she left the area on Thursday, Ms. Aung San Suu Kyi was asked by reporters to comment on the hostile reaction she received.

“I have never done anything just for popularity,” she said. “Sometimes politicians have to do things that people dislike.”