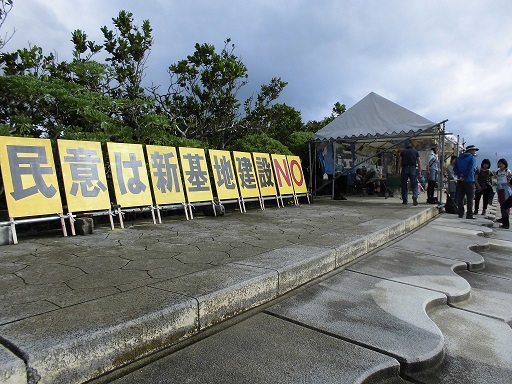 On 13 October Okinawa Governor Takeshi Onaga nullified the permit to carry out land reclamation in Oura Bay, granted by the previous Governor Hirokazu Nakaima, explaining that it contains illegalities. We of the Anti-Helicopter Base Council unconditionally support this decision, and more than ever give our full backing to the Governor.

However the Defense Department’s Okinawa Office has begun legal action aimed at having the nullification itself declared illegal. The Japanese Government not only wants to trample on the war-renouncing clause of the Constitution, but also is determined to reclaim land from the richly diversified Henoko and Oura Bays, habitat of the internationally protected dugong, so as to build a new attack base for the U.S. Marine Corps.

That the Governor, and Okinawa itself, shall not find themselves isolated, we call upon the people of all the regions of Japan, and of all the world, to act in solidarity with us, and come and join the sit-in that has been continuing at the entrance to the construction for over 400 days. At the same time we call upon all local governments to present to their councils resolutions demanding that local government be respected.

The Anti-Helicopter Base Council is a citizen’s group, founded at the time of the 1997 Nago City plebiscite on the question of whether to build this new base at Henoko. In this plebiscite, which was carried out under the slogan, “On important matters, the citizens of Nago will decide”, a majority opposed the base. Despite this, now18 years later the Japanese and US governments are trying to ram through the project.

It was during the Battle of Okinawa and in the confusion after the defeat that the US military confiscated our land and built bases on it without our consent. Now, 70 years after the war Okinawa, which comprises 0.6% of Japan’s territory, bears 74% of all the U.S. bases in Japan, and suffers from the environmental destruction and never-ending accidents and incidents that they bring.

It was after the 1995 gang rape of an elementary school girl by three US GIs that Okinawa exploded in anger, and demanded that Okinawa’s burden of bases be reduced. In particular, we demanded the immediate closure and removal of the dilapidated Marine Corps Air Station at Futenma, which is located in the middle of a crowded city, does not observe the aviation laws of either Japan or the U.S., and has been called the most dangerous airfield in the world. However the Japanese and U.S. governments demanded a replacement facility, and insisted that this replacement facility should be built within Okinawa, at Henoko. And this time,

breaking with the past by claiming the need for safety, they plan to make it state- of-the-art, all paid for with Japanese taxpayers money.

On this September 21st Governor Onaga, with the overwhelming support of the Okinawans who oppose the construction of the new base, took his case to the Human Rights Council of the United Nations, where he described how in the 70 years since the war the human rights and the right of self-determination of Okinawans have been trampled on. He criticized the Japanese government for ignoring the Okinawan people’s will, and announced his intention to put a halt to the construction of the new base.

However the Japanese government representative in that council replied, “We are prepared to return 0.2% of the U.S. bases in Okinawa. Okinawa’s economy has recovered. The security alliance with America is very important to us. We will continue to explain these things to Okinawa.” And at the press conference that followed she said to the Japanese media, “A base problem is not an appropriate issue for the Human Rights Council”, entirely rejecting Governor Onaga’s appeal.

Just as at the recent Diet session the Japanese government ignored the public will and rammed through the new Security Bill, which permits collective defense, so it is prepared ram through the construction of the new base. To protect Okinawa’s human rights and right of self determination, and for the development of Japan’s democracy, we must stop the construction of this new base at Henoko.

We are at a historical turning point. Local self-determination is at risk. We ask people from all regions of Japan, people from all parts of the world, come and join the sit-in at Henoko. If enough people gather, the base construction can be stopped.

Resolutions urging that Okinawa’s right of self-determination be respected, expressing support for the Okinawan people, and opposing the construction ofthe new base at Henoko and Oura Bay, have been adopted by the city council of Berkeley in the U.S., and in Japan by the city and town councils of Suita, Amagasaki, Iwakura, Musashino, and Hakuba. We strongly urge people all over the world to press their local government councils to adopt similar resolutions. In this waywe can promote the return of the right of self-determination to the hands of the citizens, and a democracy that truly serves the needs of the people.