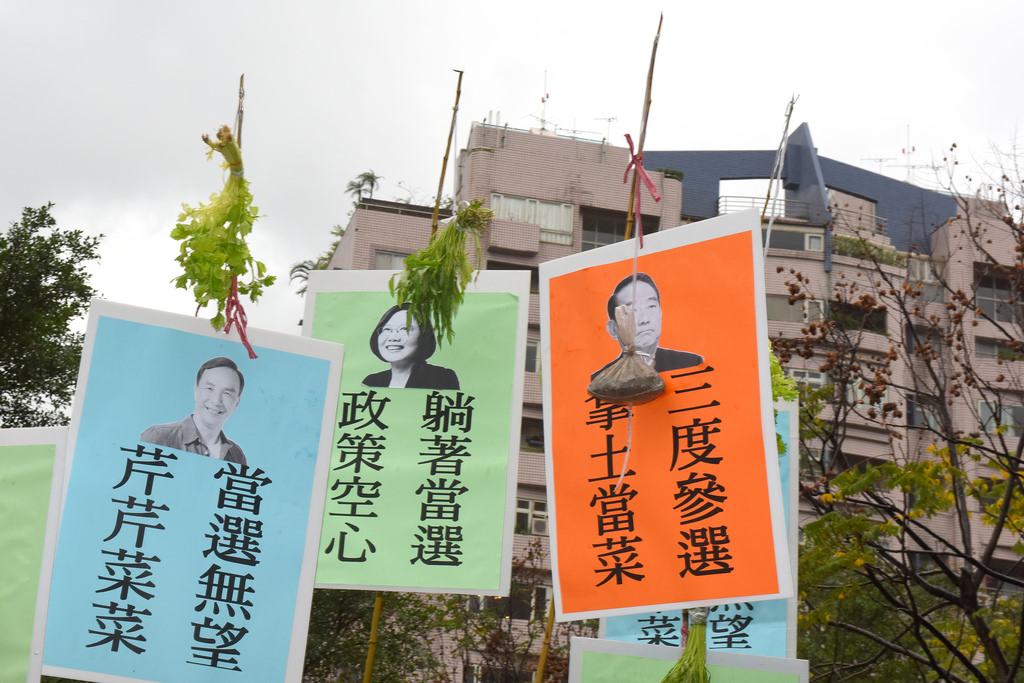 There will be three presidential candidates competing in Taiwan’s 2016 presidential election. They are Tsai Ying Wen the leader of Democratic Progressive Party (DPP), Eric Chu who represents the Chinese Nationalist Party (Kuomintang, KMT) and James Soong from the People First Party (PFP). According to pre-election opinion polls, Tsai Ying Wen’s popularity rating is the highest, much greater than that of Eric Chu and his party that is currently in power. The third competitor James Soong’s influence is relatively insignificant. Therefore, people are expecting that the opposition party, the DPP, will defeat the KMT. The result of this ongoing campaign seems quite predictable.

To compare the situation now with four years ago, we see a very different scene. In 2012, the KMT’s presidential candidate, Ma Ying Jeou, beat his then opponent, Tsai Ying Wen, and obtained 51% of the vote. His party won over 64 seats in congress (out of 113 seats), which was definitely an overwhelming victory. So, why have things turned so bad for the KMT? What has happened in the past four years?

To discover the cause of the KMT’s deteriorating popularity, we need to go back to the year 2014. In this year, the Taiwanese masses started a strong occupation protest –the Sunflower Movement. The primary aim of this movement was to protest against the passing of the Cross-Strait Service Trade Agreement (CSSTA) by the ruling KMT. The CSSTA means more neoliberalism for the working class and further economic ties with China, which might enable the autocratic Chinese Communist Party (CCP) regime to diminish Taiwanese democratic rights. The challenge from below is two-fold. First, opposition to the free trade agreement implies worsening wealth distribution. Second, the protest against closer cooperation with China’s authorities means Taiwanese people are afraid of the CCP regime, while the CCP disapproves of the right to self-determination for Taiwanese people. This is why the KMT has become more and more unpopular and people feel disappointed with the KMT regime.

Nevertheless, it is also interesting to ask about the stance that the DPP takes. Is the DPP capable of solving these difficulties? By observing the policies of the KMT and DPP presidential candidates we can gain a thorough understanding of their nature as capitalist political parties. When they express the need for Taiwan to “reform” and point out the “crisis” of our society, what are their true concerns? The KMT tried to increase its degree of support by appearing to defend the “ROC” identity (the official name of our country: Republic of China). The DPP accused the KMT of the treasonous act of “selling Taiwan to our enemies”, and surrendering to the CCP regime. Both of these declarations are either false or oversimplified. The elites of the KMT and DPP are merely trying to manipulate Taiwanese people for their own advantages.

For Taiwanese capitalists, the crisis exists. They urgently need the future government to help them increase their profits and competitiveness. Concerning the growing profitability of China’s market, Taiwanese capitalists wish the cross-straits relationship could remain “stable.” Nonetheless, the word “stable” in this sense means subordinating to the CCP’s brutal denial of Taiwanese sovereignty and democratic rights. For Taiwanese working people, the stagnation of wages and living standard is also a crucial issue. People are looking for a government that can redistribute the wealth of our society in the face of increasing inequality. We can take a few of their administrative blueprints as examples to illustrate the KMT and DPP’s political nature.

The KMT candidate Eric Chu proposed a policy that the future administration should raise the minimum wage from NT$20008 to NT$30000 in four years. He said that this is new strategic thinking in economic development; to take increasing wages instead of increasing profits as a motor for growth. There is no doubt that this is a relatively progressive measure, but if we consider the long history of KMT’s policy of suppressing labor then this announcement seems extremely deceitful. In the past eight years of the KMT being in power, it has strongly opposed the increase of the minimum wage on more than one occasion. The KMT, as an old right-wing political party, cannot convince Taiwanese people that this sudden change of tone is sincere. As for Tsai Ying Wen, by refusing to make any promises she avoided the challenge of Eric Chu on the minimum wage issue. This demonstrates the pro-capitalist and conservative stance of Tsai Ying Wen. She believes that the state should mobilize resources to strengthen Taiwanese firms’ competitiveness. If the firms get more profitable, then it will be able to raise the employees’ wages. This is nothing but right-wing Reaganomic thoughts with a new face. The cause of wage stagnation is not insufficient profits for capitalists, but the unbalanced distribution between social classes. This is what pro-capitalist politicians such as Tsai Ying Wen will never acknowledge.

Tsai Ying Wen’s cross-straits relations policy is more than worth mentioning. Stating that she will maintain the status quo, use Taiwan Consensus as her guiding principle and abide by the Republic of Taiwan’s current constitutional system, Tsai Ying Wen’s stance on cross-straits relations has rapidly shifted from pro-independence to maintaining the status quo during the 2016 campaign. It is now hard to distinguish her cross-straits policy from that of the KMT. Why is this happening? Because Tsai Ying Wen knows that if she stands for Taiwanese capitalists, she should not be hostile towards the CCP regime. Insisting on Taiwanese people’s right to self-determination against the CCP endangers Taiwanese capitalists’ profits. This is a dilemma for administration. We are convinced that both the KMT and DPP as capitalist political parties will favor the latter. They will make concessions to the CCP to protect the bloodline of Taiwanese capitalism, even if that cost the country’s sovereignty.

In the aftermath of Sunflower Movement, the problems antagonizing Taiwan such as the uneven distribution of wealth and the threat to democratic rights have become even worse under the KMT’s rule. This is why people disdain the KMT and turn to supporting the DPP. Some people see these problems as an administrative failure of the KMT, not as an indispensable effect of the development of Taiwanese capitalism. Other people reluctantly support the DPP because they want the KMT to step down. They all share one thing in common, which is that they are deluded about the DPP. Falsely believing that the DPP will solve the problems mentioned above, DPP supporters might become deeply frustrated in the future because they did not expect the pro-capitalist and opportunist nature of Tsai Ying Wen. Undoubtedly, social struggles such as the Sunflower Movement will continue. Real change will not come with the electoral victory of the DPP.


Further explanation and the results (written after the 2016/1/16 election):

In addition to the KMT and the DPP, there are two other emerging political forces, originating from the 2014 Sun Flower Movement, which took part in the election. They are the “New Power Party (NPP)” and the “Social Democratic Party (SDP).” The NPP formed a close electoral alliance with the DPP. The NPP’s legislative candidates supported Tsai Ying wen and Tsai Ying Wen supported them as well. The SDP chose to mark itself out as critical of both the KMT and the DPP in the beginning. However, one of the most prominent figures of the SDP declared her support for Tsai Ying Wen right before the vote. Although there is a trade unionist candidate in the SDP, who promotes progressive labor demands and enjoys extensive grassroots support, the leadership of the SDP is to some extent opportunist.

The result of the presidential and congress elections held on January 16, 2016 is unsurprising. Tsai Ying Wen got 56.1% of the vote, surpassing Eric Chu’s 31.0%. The DPP is going to be the new ruling party of Taiwan. It is worth mentioning, the voter turnout hit its historical lowest record this year, which is only 66.2%. Since Taiwan’s first presidential election, the voter turnout was never lower than 70%. This might be a sign that people are becoming disappointed with both the KMT and the DPP more than ever. As for the result of the congress election, the new structure of congress seats is – DPP 68, KMT 35, NPP 5, PFP 3. The NPP got 6.1% of the vote. For a newly formed political party such as the NPP this result was a great victory. Unfortunately, the SDP got only 2.5% of the vote, below the 5% threshold, meaning that they did not get any seats. The political structure and voter’s mindset is still constrained by the KMT-DPP system.