For this cook the Umbrella Movement is not yet over 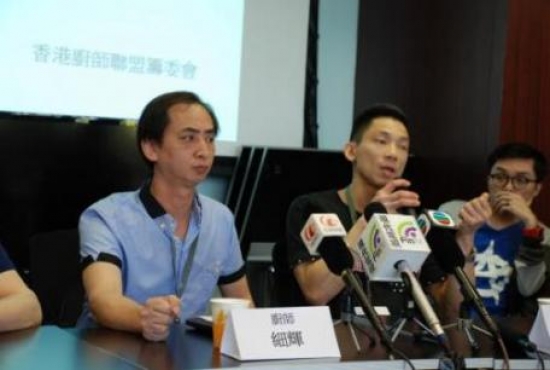 Note: This is an adapted account about a Hong Kong cook, Sai Fai, and how he became politicized during the Umbrella Movement. The original Chinese report was posted on the NWSC (Neighborhood and Workers Service Centre) website.

In 2014, like many people, Sai Fai had to endure pepper and tear gas at one of the the three occupation sites where he worked in Admiralty. This was where he learned the first lesson of politics. At first he was just curious about what the students were doing there but soon he was drawn into the movement to support the students. One day he asked himself the question, “the students are doing this for us, but what have we done?”

“The whole night I was thinking over the question: should we just sit and observe what the students are doing for us, or should we all stand up (for ourselves)? Why (haven’t we stood up)? It is because we are all slaves ...... we just care about eating, about getting a shelter, about working hard so as not to lose our jobs so that we can support our families ...... but this also allows the government to make us into slaves, and (as slaves), we can’t even have fun, not to mention fight for democracy.”

"Bingo! It seems everything can be explained now. ...... this is not what society should be like, and of course the way it distributes wealth is also wrong!!”

Sai Fai is proud of being a Hong Kong cooks because of their ability to blend different dishes from different cultures into Hong Kong dishes. But the working conditions for people working in the food industry are very poor. After the Umbrella Movement he decided to found a cooks trade union. But he stresses that this union should be politicized because there are many things which affect working people’s lives that are not related to working conditions, from housing and transport to medical care etc. And the shortening of working hours requires the making into law of a regulated working week. All these matters require political actions.

The lesson of the Umbrella Movement is that “it was far too disorganized.” He thinks that in future actions trade unions should link up together and form their own congress to fight for democracy.