Deceit, Rule-bending, and other malpractices - An exposé of formula milk companies' product development strategies and promotional practices in Hong Kong and mainland China 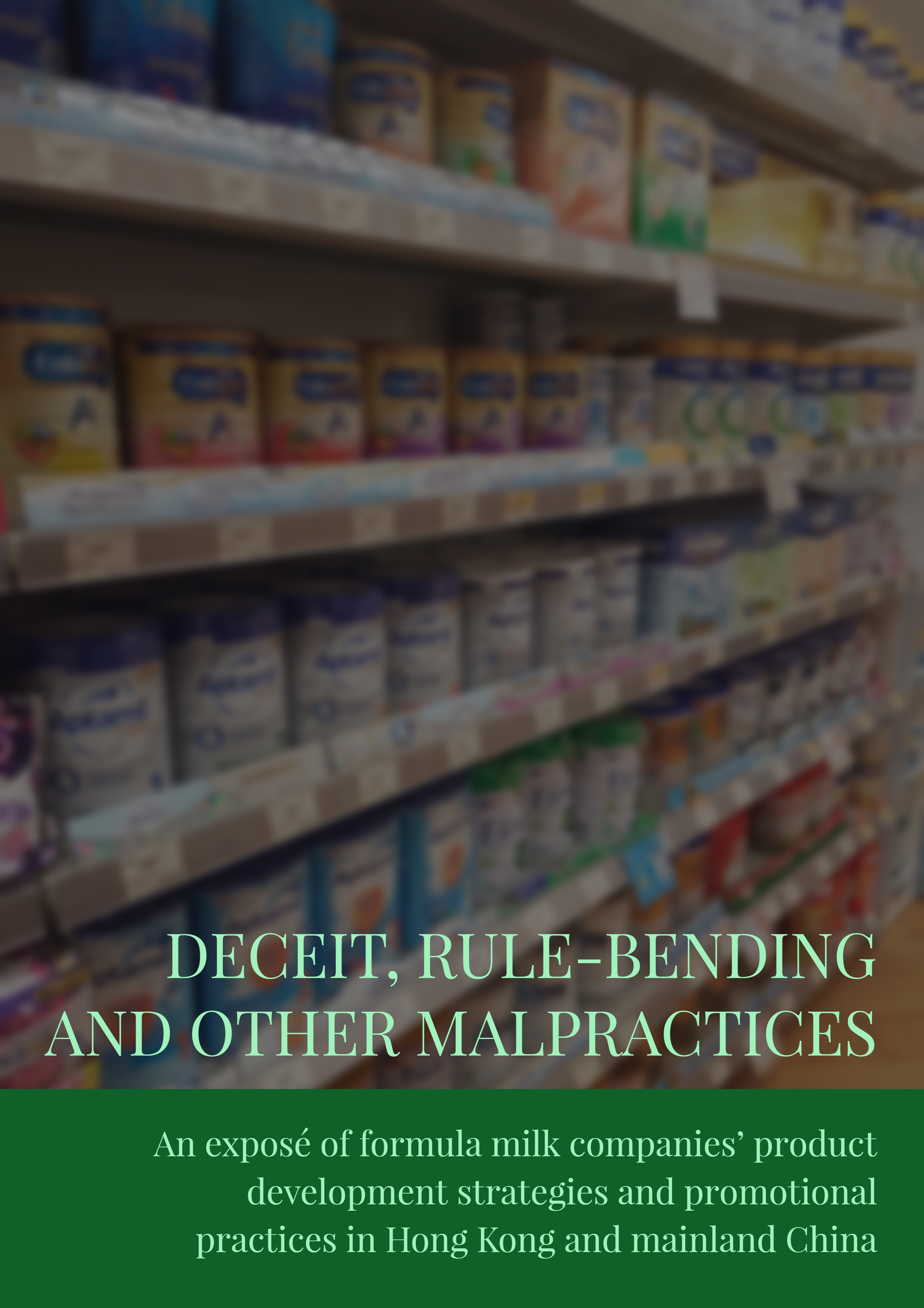 This report exposes the most problematic and unethical business practices of breastmilk substitutes (BMS) manufacturers in Hong Kong and mainland China and identifies the inadequacies of existing regulation of the industry.

Breastmilk is widely regarded as the “gold standard” of nutrition for infants and young children. This is evident from the World Health Organization’s (WHO) recommendation that infants should be exclusively breastfed for the first six months of their lives, and thereafter receive nutritionally adequate and safe complementary foods while continuing to be breastfed up to two years of age or beyond. Despite WHO’s efforts, exclusive breastfeeding rates remain at around 40% globally; breastfeeding figures are notably lower in Hong Kong and mainland China, which are incidentally two of the biggest and most lucrative markets for the formula milk industry.

Studies have associated the promotion of infant formula products with declining breastfeeding rates, while doubts about the scientific underpinning of infant formula products’ many supposed health and developmental benefits have persisted. We have thus written this report, which provides an overarching situation analysis of the current BMS promotional practices in Hong Kong and mainland China. It follows two earlier reports that looked at the nutritional composition and marketing practices of major formula companies (Milking it – How Milk Formula Companies are Putting Profits before Science) and examined Nestlé’s formula milk products and promotional claims (Busting the myth of science-based formula).

Our report investigates how major formula companies in Hong Kong differentiate their products, the science behind their choice of ingredients and promotional claims, and the ethical issues arising from misrepresenting certain products as “premium” and charging carers extortionate prices for such products (chapter 2). It also documents the worst of BMS manufacturer’s marketing practices, as found in television commercials, in-store promotion, and other channels, highlighting the Code violations they constitute (chapter 3). Finally, it evaluates the new formula registration regime implemented by the Chinese Food and Drug Administration for its effectiveness in curtailing excessive and improper product differentiation and the use of inappropriate promotional claims (chapter 4).

Our research yielded several important findings. Regarding product premiumisation, we found that it is common for BMS manufacturers to:

BMS manufacturers liberally use these strategies to portray some of their products as “premium” to justify charging much higher prices. This not only exploits carers’ concern for their children’s healthy development and willingness to pay high costs to provide the best for them, but can also undermine breastfeeding, as these claims misrepresent the true nutritional gap between formula and breastmilk.

We specifically investigated whether Nestlé has completed the corrective actions it promised to make following a meeting with the Changing Markets Foundation (CMF) and Globalization Monitor (GM) in March 2018, in response to the publication of Busting the myth of science-based formula. Nestlé pledged to phase out sucrose from its formula products for infants aged between six to twelve months, remove the nutritional advice on NAN PRO regarding vanilla flavourings, and phase out vanilla flavourings in several formula products for infants under 12 months old. We found that Nestlé did not fulfil the latter two commitments:

Regarding inappropriate marketing practices, we found that BMS manufacturers frequently stretch the rules detailed in the International Code of Marketing of Breast-milk Substitutes, adopted by the WHO in 1981 and subsequent World Health Assembly resolutions. These practices include:

Our evaluation of the formula registration regime, implemented in 2018 in mainland China, revealed that its nine-product quota leaves much to be desired. Designed to limit the extent of formula product differentiation, the quota can be easily circumvented as it does not apply to whole group companies but individual “enterprises” like subsidiaries (see pp.50-53 for Yili example and pp.54-56 for Nestlé example). This ends up favouring industry heavyweights, who have the investment capacity to establish subsidiaries and joint ventures to register formula recipes, thus allowing them to retain and expand their product portfolio. On the other hand, the stipulations on the use of promotional claims narrowly focus on product labels, thus leaving misleading, unscientific and exaggerated promotional claims used on product information websites, television and online commercials, and social media channels unregulated (see pp.59-61).

Our report concludes (chapter 5) with detailed recommendations for regulators to help them design more effective laws and enforcement mechanisms targeting the inappropriate promotion of infant and young children formula milk products (in full, see pp.66-68). We recommend governments to:

We also created a list of demands to BMS manufacturers (see p. 69).

We gave the companies we investigated in this research the chance to read and respond to our findings and allegations. Their comments and our subsequent responses are recorded in full in the appendix of this report.

We hope by calling out BMS manufacturers’ problematic and unethical business practices and identifying the inadequacies in existing regulations and law enforcement, this report can contribute to the global effort to protect and promote optimal breastfeeding practices and hold BMS manufacturers to account. Constraints in time and resources mean we only have a partial understanding of the infant formula industry. Therefore, we welcome efforts from other NGOs and groups interested in promoting breastfeeding and scrutinising transnational companies’ business practices to help better our understanding of the threats that optimal breastfeeding practices are facing around the world.