Joint statement: Occupational Health and Safety for Construction Workers and Safe Building Standards Must Be Guaranteed 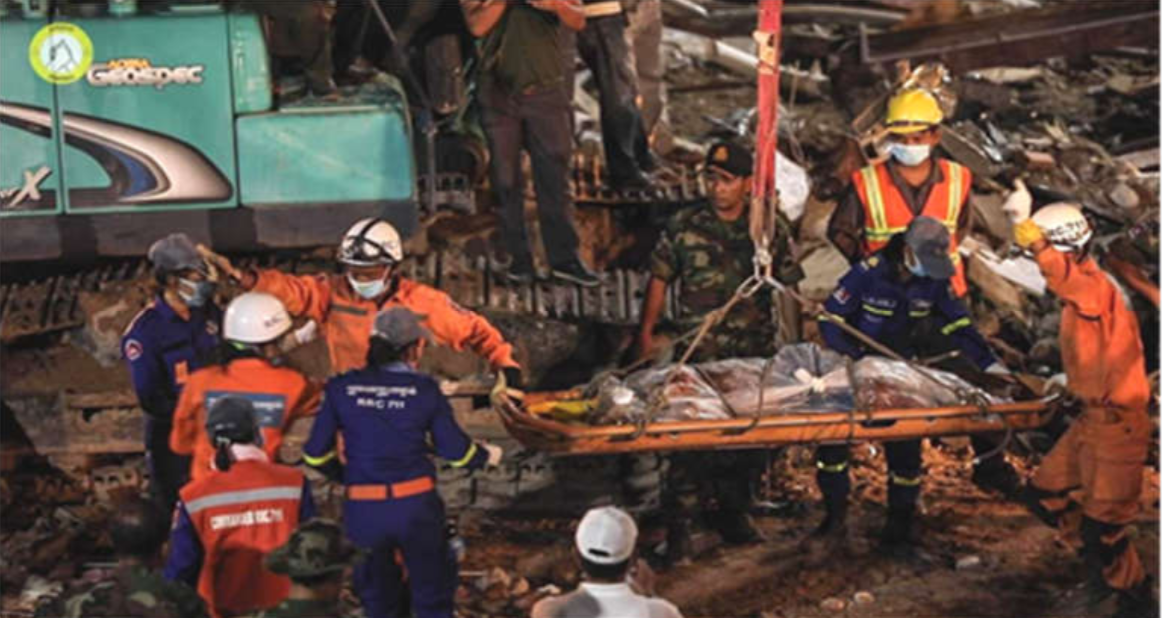 Rescue teams pull out victims from the rubble.

We, as workers, communities, associations, trade unions, civil society organisations and human rights defenders working for the promotion of human and labour rights in Cambodia, extend our heartfelt condolences to the families of those who lost loved ones in the tragic deadly collapse of an under-construction seven-storey building in Village 3, Sangkat 4, Sihanoukville Province on 22 June 2019 at 4:00 a.m. We are grateful to the mixed rescue team for their persistent efforts to locate victims during the critical sixty hours of searching.

As of 27 June 2019, at least 28 construction workers were confirmed dead, including five women and rescue teams had pulled out another 26 injured. Amongst the injured were two 16-year-olds, a girl and a boy. All victims are now at Preah Sihanouk Referral Hospital. The victims were migrant workers from other Cambodian provinces.

The evening prior to the accident, an eye-witness reported that two trucks transported between 30 – 40 workers into the construction site. These workers stayed on the ground floor of the collapsed building along with other workers’ families. One worker said that the company had very poor health and safety standards. At least 60 workers and their families used the building as their accommodation and workplace and the building collapsed whilst they were sleeping.

The building was being constructed by a Chinese company named Xi Gang Tang Gong Gou Ji Haisao which was publicly known as lacking legal authorisation to carry out construction activities from the authorities. The construction site was on 15x30 square meters of land located in an urban area of Sihanoukville Province and was 80% completed despite receiving two stop-work notices from authorities.

On 18 October 2018, the Ministry of Land Management, Urban Planning and Construction (MLMUPC) found that there were many unauthorised construction projects in Sihanoukville Province and that illegal construction activities affect the public environment and beauty as well lead to poor construction quality.

“Urban development must prioritise preventing environmental impact, as well as on sustainability and public safety which are the role of State. Any violations of laws or government instructions are illegal actions and the law must be strictly enforced for the perpetrator in order to make them accountable”, said Mr Sok Kin, president of Building and Wood Workers Trade Union Federation of Cambodia (BWTUC).

One day after the accident, the government established a committee to inspect and investigate the building collapse in Sihanoukville. The committee’s mandate is to review the technical inspection of buildings and compliance of building standards on construction sites in Sihanoukville and the prevention of risks.

This is not the first building collapse in Cambodia's construction history. In the middle of 2018, the 23rd floor of the Mekong View 6 collapsed, killing 2 workers and injuring at least 5 others. In mid-August 2018, an under- construction building in Russei Keo District, Phnom Penh collapsed whilst workers were working. Fortunately, nobody was injured. In May 2013, the roof of Wing Star Shoes footwear factory in Kampong Speu Province collapsed, killing a 15-year-old girl and a 24-year-old man. In April 2016, there was also a bridge collapse at Top World Garment factory. Often, construction projects use sub-contractors who provide unreasonable working conditions, violate workers' fundamental legal rights and do not fulfil their duties to guarantee workers' health and safety.

“Implementation of Occupational Health and Safety standards on construction sites must be strictly and effectively enforced. Taking the workplace as accommodation risks workers’ and their families’ lives. The builder and owner must be accountable and responsible for their crimes. Compensation is not enough,” said Mr. Khun Tharo, program manager at Center for Alliance of Labor and Human Rights (CENTRAL).

Having seen this horrific event, we call upon the Royal Government of Cambodia and private developers to take immediate action for a long-term solution to prevent similar tragedies in the future by implementing the following recommendations: