(This article was first published in Amandla! Issue 43. ) 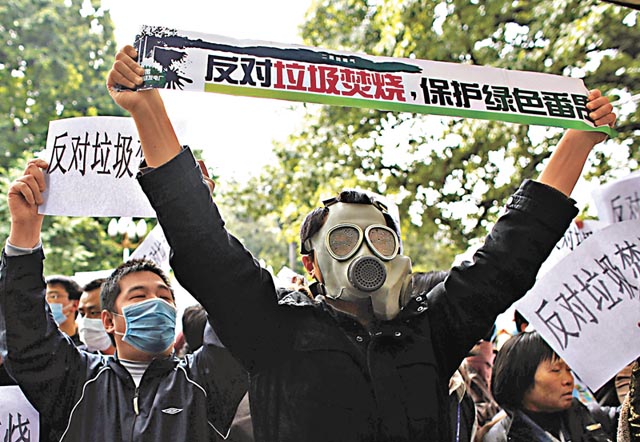 Just in the last month there have been two cases of environmental protests occurring in China. Around one thousand people protested on the streets of Yangjiang city, in Guangdong province, against the construction of an incinerator. And ten thousand  people protested against a chemical factory in Shangrao city, Jianxi province. The protesters in both cases battled with the police. As a result, many people were injured or arrested.

People hate incinerators, Paraxylene (PX) plants (PX is a chemical used in manufacturing plastic bottles and polyester clothing), nuclear power plants and chemical plants. Their hatred is so strong that they are not afraid to fight the police. Unlike labour strikes in China, environmental protests always call people out to demonstrate in the streets. In China, freedom of assembly is not assured and being arrested is very common for protesters. So why are so many people still willing to take the risk and participate in these demonstrations?

Since former Chinese leader Deng Xiaoping proposed the "reform and opening up” policy in 1978, the Chinese economy has experienced rapid growth. Until 2014, the average annual GDP growth was 9.7%. This means that the Chinese economy doubled every seven years. This growth is even greater than Deng’s plan, which aimed for quadrupling* in 20 years (about 7.2% per year). Under the rapid economic development, the traditional image of China, with a beautiful natural environment of rivers and mountains, has been badly altered by pollution. The environment of China has been sacrificed for the sake of growth.

Carbon dioxide emissions increase when industrial output increases. In 2007 China overtook the United States as the world’s largest carbon emitter. At the same time, air pollution is serious. In 2006, 37.6% of China’s 559 major cities failed to meet national air quality standards. In February this year, Chai Jing, formerly a reporter for China Central Television (CCTV), the main state broadcaster, released a self-financed documentary called “Under the Dome”. It focuses on the toxic haze in Beijing. This documentary sparked widespread concerns. Chai represents the new generation of the middle-class who care about their lives and health. However, this documentary was quickly “harmonized” by the Chinese government (“harmonized” is a word created by Chinese “netizens” to describe being censored by the government).

In addition to air pollution, water pollution is another serious problem. In China, at least 320 million people cannot access clean water.  According to the 2014 China Environmental Bulletin, nearly two-thirds of the ground water and one-third of the surface water is not suitable for humans to come into contact with. Water from nearly 40% of lakes and rivers is not suitable for drinking, aquaculture or swimming. Tap water in the cities is not safe either. There were at least seven leakages of chemicals or heavy metals into tap water in Chinese cities between 2010 to 2014. They affected more than 300 million people.

Health problems caused by pollution are also getting serious and concern everybody who lives in China. Recent research from physicists at the University of California, Berkeley, calculated that about 1.6 million people in China die every year from heart, lung and stroke problems because of incredibly polluted air, especially small particles of haze.

Food is not safe

Water, air, and even food safety cannot be guaranteed. Over the past decade, there have been a number of food safety scandals. In 2008, a number of Chinese baby formula companies were discovered adding melamine to their products. In 2010, the media revealed the “gutter oil” production chain in China (this is used oil which comes from restaurants, sewer drains and slaughterhouse waste and is illegally recycled). 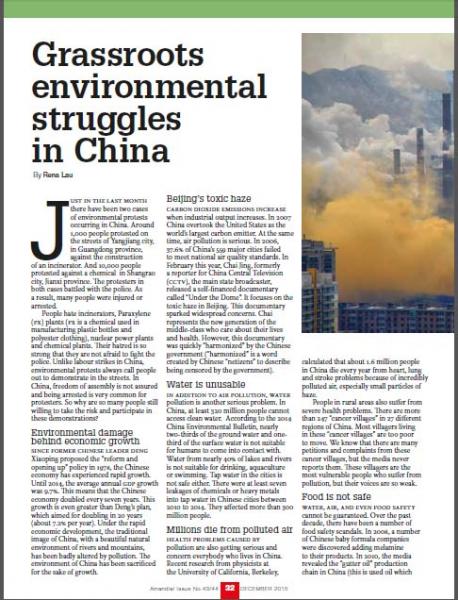 Other scandals include the abuse of plasticizer (an additive that increases plasticity ), and the use of banned pesticides on vegetables and fruits. “Black-hearted food” (food manufactured dishonestly from contaminated products) is everywhere. This is also the reason why new middle class people are buying baby formula and groceries overseas.

Beyond a certain point of pollution, a country’s food, water and air safety cannot be guaranteed. Undoubtedly, this situation is a hotbed for unrest. According to the state news agency, Xinhua, environmental protests in China have been growing by 29% per year since 1996, and a much more rapid increase of 120% occurred in 2012. The Chinese people have already reached a consensus that the causes of the ongoing pollution problems are the corruption of government officials and the lack of monitoring of polluting companies. So the only effective reaction is to march in the streets to fight against any sources of pollution that may be built nearby.

Not just about “Not in my back yard” (Nimby)

Nimby  syndrome has often been mentioned in relation to China’s environmental protests. These include the protests against PX plants in Dalian, Xiamen and Kunming, as well as the anti-incinerator demonstrations in Beijing, Yangjiang and Huizhou.  All these protests put out the message "do not build in my backyard". In these cases, opposition declined when the targets were relocated to remote areas.

However, there was an exceptional example in the Panyu district of the southern city of Guangzhou. Panyu residents not only objected to the  building of incinerators in Panyu. They also called for the banning of all incinerators in China and demanded  more environment-friendly waste recycling methods.

With the support of local media, the residents succeeded in prevailing on the government to stop the plan. This case was successful and exceptional because media and environmental activists in Guangzhou have more freedom than in other cities.

If the Chinese government cannot deal with these serious pollution problems, people’s discontent will continue to rise. In recent years, the Chinese government has revised the “environmental law" to make it stricter.  It has also implemented the so-called “ten-point water plan”, which is considered the strictest environmental policy in China’s history. However, many Chinese laws cannot be implemented at the local level. Under the rule of the Chinese Communist Party, corruption is still common and human rights are restricted. This reduces the effectiveness of government-led reforms..

In the short term, we can only hope the protests of the people will bring some improvements. If not, the situation will continue to deteriorate.

(Rena Lau has been working at Globalization Monitor since 2011. She is the author of the 2012 study “Restructuring of the Honda Auto Parts Union in Guangdong, China: a two-year assessment of the 2010 strike”.)