Recently, several public housing estates are discovered lead exceeding in tape water. This alerts the concern of public water safety, as well as the effectiveness of the monitoring system on public works in Hong Kong.

Last month, a legislative councilor of the Democratic Party published an investigating report of water quality of one public housing estate- Kai Ching Estate that revealed tap water of four buildings containing lead level which is higher than WHO standard (10μg/l). In Hong Kong, all public housing estates are managed by Housing Department (“HD”) and at the same time, Water Supply Department (“WSD”) monitors their water quality. These two departments are under the administration of Transportation and Hosing Bureau (“THB”). These two responsible departments denied and challenged the reliable of water testing at the beginning but admitted the high level of lead in tap water two days later. The major concern of lead in water is the health risk. Lead is toxic, and lead poisoning can cause organ failure and affect brain development.

After the incident has been disclosed, the public urge the Government to re-test the quality of tap water. Until today, nine public housing estates have already being reported as having exceeding lead in the water. And more than 100 people in-group of children; pregnant woman and breast-feeding woman have higher level of lead in blood.

The following is the table of estates having excessive lead in its water:

Questions need to be asked in incident:

In fact, the Water Supplies Department (WSD) has strict guidelines on drinking-water quality, based on World Health Organisation standards. The department should test water frequently for microbe content, radioactive substances, chemicals such as DDT, and heavy metals, including lead.

At the beginning of the incident, WSD denied that lead contamination in water could be found in Kai Ching Estate. Based on the report from April 2014 to March 2015 of samples collected by WSD from different sites, including water treatment works, distribution networks and consumer taps, the lead content in drinking water is less than 0.001 milligram per litre, which is much lower than the WHO guideline. However, the later testing reports obviously show that the data might not be fully representative at the beginning.

According to Chan Kin-Man, chief chemist at the Hong Kong Water Supplies Department, said on 15 July to the journalists: "There's no lead found in the test sample because we have quality control. We do periodically conduct checks in different locations, but the last mile to new buildings is handled by our customer services department. It's not under our supervision." This means that WSD does not monitor the consumer’s premises but check only after flushing the pipework.

Lead contamination in water is almost always due to corrosion of pipes or solder containing lead, the use of which has been banned for decades, especially should be strictly banned in Hong Kong. According to the Waterworks Regulations, pipes and fitting must meet British standards that prohibit the use of lead in water pipe and soldering material. It is very unusual for such new estates to encounter these problems.

Housing Authority (HA) procures the constructions of all Public Rental Housing (PRH) estates under the tendering procedures. And, Development Bureau maintains lists of public works contractors and a central performance reporting system of public works contractors. Though the government claims that UNDER ITS tendering system contracts do not necessarily go to lowest bidder, the insiders of construction industry said to the reporter that price is still the most important factor when the government chooses the bidders. Under this system, the material used in the construction projects cannot be guaranteed as safe.

In this water scandal, it is found that soldering material containing high level of lead that is prohibited of using in water system. There are several layers of the contractors, subcontractors. Questions should be asked, for instance, how the authorities monitor the involvement of project contractor, works contractors, subcontractors and their credentials, sourcing and supply of a range of equipment and materials, and monitoring of compliance with standards and specifications.

Like all assembly line production, pre-fabricated parts can lower labor cost and cut short production time, but when they are done outside HK then there is not only the issue of difficult to monitor but also the problem of polluting the local in Mainland China.

Boosting the use of bottled water 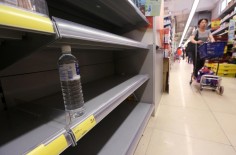 After the exposure of the incident, the government delivers bottled water to some residents such as elderly and family with children. Many affected residents fear to drink tap water any more and buy bottled water from different ways. Bottled water is flying off supermarket shelves. This increase in using bottled water burdens the landfill site even further.