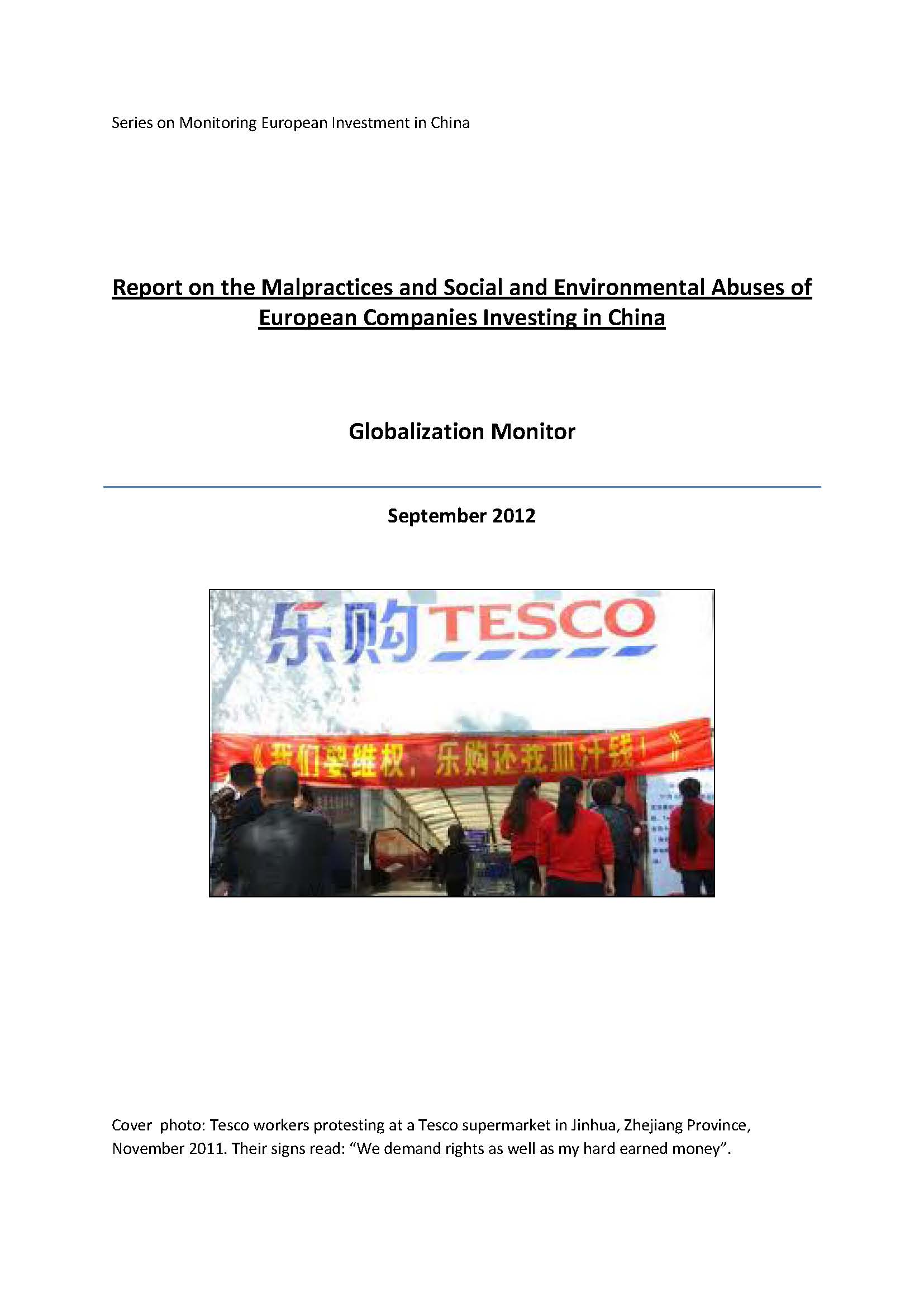 This report is a follow up to our 2010 pilot study Complicity, Campaigns, Collaboration and Corruption: Strategies and Responses to European Corporations and Lobbyists in China in which we looked at the general lobbying strategies and tactics used by European corporations in order to advance their investments and business interests in China. The previous report showed that in carrying out their business interests in China, the resorting of multinational companies to corrupt practices or other harmful lobbying techniques is very commonplace. Rather than advancing human rights, something which European governments and companies made clear was not their priority when they placed their investment interests above human rights shortly after the Tiananmen massacre, or rather than bringing overall benefit to society, for instance in its bringing new technology to China, something which is often cited as reason or justification for supporting the advancement of the growth of foreign investment in China, the pilot study showed that investment by multinational corporations, due to the nature of their interests and the way that they behave in China, has often impacted adversely particularly where ordinary people and the environment are concerned. Given the authoritarian nature of the Chinese state and the absence of a normal civil society, foreign companies are just as likely as domestic companies of resorting to corrupt practices. Indeed, the recent China Mobile corruption case and the reported implication of Ericsson and Siemens (outlined by this report) highlight how foreign and domestic companies can be involved in corrupt practices together for mutual benefit. Furthermore, it is also true that just like their domestic counterparts, foreign companies gain from taking advantage of the lack of freedom of association and other basic labour rights when doing business in China. At a very minimum foreign companies continued investment in China, indeed only acts as an endorsement of the current situation there.

This report aims to extend the research of the pilot study, this time with the focus more specifically on the targeting of individual European companies, whose business practices in China are a cause for concern. The companies included are mostly chosen as they are either implicated in corruption or other malpractice, are responsible for the violation of labour rights, produce products which are unsafe or harmful to consumers or potentially cause harm to the environment. In some of the cases, such as in the cases of infant formula manufacturers or in the case of Tesco, due to misinformation and dishonesty by the companies concerned, for instance regarding claims about ethical practice and commitment to Corporate Social Responsibility not matching up with the practice of the company and its suppliers, consumers are misled. In other cases, for instance, in the case of Nokia, workers rights are infringed upon and they are not even afforded the same rights as workers working for the same company in other countries, highlighting how the exploitation of Chinese workers is particularly severe. In other cases, for instance in relation to Daimler and Siemens, bribery and corruption over a number of years in order to win lucrative contracts or the personal enrichment of company senior executives has featured prominently. Despite such examples, however, the particular selection of individual companies in no way means that these companies are the sole culprits of such malpractices. Rather, the cases chosen here are selected because they provide clear illustration of practices which we should oppose whenever they surface. To illustrate both how frequently and wide ranging such malpractices are, we have therefore looked at evidence and selected cases concerning companies from six different industries or sectors to include in our study. These include infant formula manufacturers, the retail industry, the auto industry, the container industry, the telecommunications and mobile phone industry and the water industry. It is hoped that the findings of this report will be of use in activities to raise awareness of and to campaign against the malpractices of companies from these and from other industries as well.