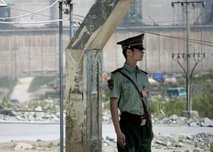 BEIJING (AFP) – At least 2,000 villagers protesting the building of a hydroelectric dam on the upper Yangtze river have clashed with police in southwest China, the government and a rights group said Wednesday.

Up to 50 people were injured in Yunnan province's Suijiang county on Tuesday when hundreds of armed police arrived to quell a protest that had lasted for five days, the Information Centre for Human Rights and Democracy said.

Protesters, who had blocked a main road and a bridge over the Yangtze for four days, hurled bricks and stones at police, the Hong Kong-based centre said.

Pictures posted online showed hundreds of riot police falling in around an armoured personnel carrier in the streets of the county seat.

The rights group said about 30 protesters and 20 police were injured.

According to the Suijiang county government, 17 policemen and five government workers were hurt in the clashes, which involved about 2,000 protesters. One ambulance was badly damaged.

"Following the forceful measures and after the understanding and support from most of the people, the roads were unblocked and normal order was restored to the county," the government said in a statement.

The Hong Kong-based group said "several thousand" demonstrators were up in arms over the quality of proposed housing being offered to up to 40,000 people who are being displaced to make way for the Xiangjiaba dam.

Protesters were also baulking at the government's refusal to pay the full cost of removing a local graveyard from the dam site.

According to the rights centre, the protest started after a 6.8-magnitude earthquake struck neighbouring Myanmar on March 24, leading to concerns over the quality of the proposed housing.

Green groups had long fought against the construction of the Xiangjiaba dam, which according to the environmental group International Rivers is one of four dams being built along the upper reaches of the Yangtze.