Chinese lending and the Venezuelan crisis. 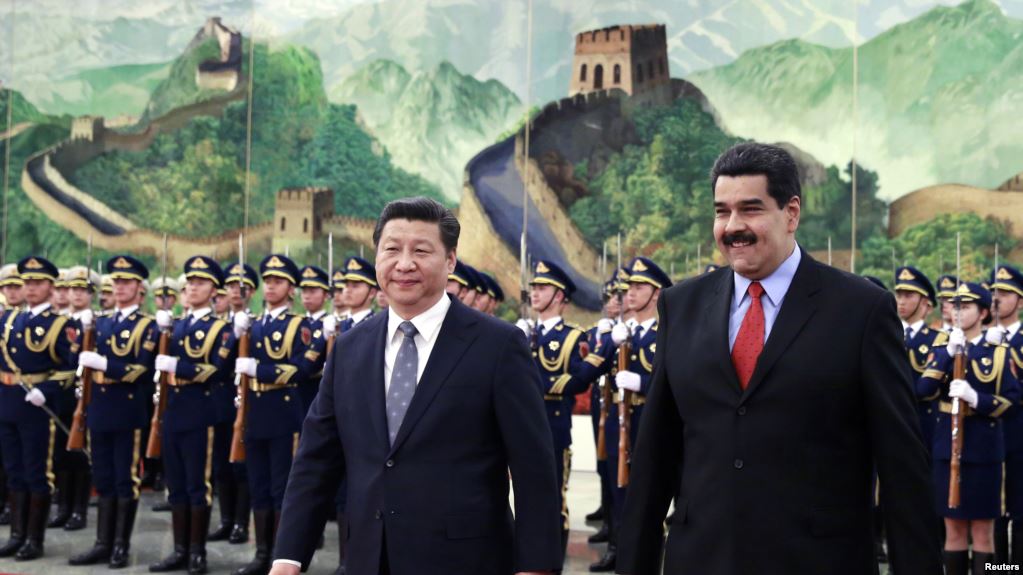 As China seeks to expand its influence and investments overseas, Venezuela represents another cautionary tale that highlights some of the limits and problems of these expansion plans. Over the last ten years, Venezuela has received loans from China on an unprecedented scale as well as other significant investments. However, affected by falling oil prices and the Venezuelan economic and political crisis that has developed since the death of former Venezuelan president Hugo Chávez in 2013, in a short time Venezuela has become a very risky place for China to invest and these loans potentially a very heavy burden to Venezuela.

Under Chávez, diplomatic and economic relations between Venezuela and China grew much closer. In line with China’s ambitions of expanding relations with Latin American countries from the mid-2000s onwards, as set out in its first policy paper on Latin American and the Caribbean in 2008, Venezuela which was viewed as an important political and economic ally under the policies initiated by Chávez, received significant attention and since then has become the biggest recipients of Chinese investments in Latin America. In terms of lending, by 2012/2013 the China Development Bank (CDB), China’s largest lender, having provided US$40 billion in loans and with the promise of more, had loaned more to Venezuela since 2008 than any other developing country had received in such a short time period.[1] At that time the CDB was putting almost a third of all its overseas lending into Venezuela.[2]At around the same time, a previously established US$6 billion China-Venezuela Joint Investment Fund was doubled to US$12billion in 2009, with China committing to contribute US$8 billion and Venezuela US4 billion to finance infrastructure and social projects in Venezuela and boost Venezuela’s oil exports to China. Referring to the agreement to increase the fund, Chávez reportedly said that, “Venezuela is ratifying its status as a partner supplying petroleum to China for the next 500 years.”[3]

With Venezuela sitting on the largest oil reserves in the world, oil has been a key component shaping China-Venezuelan relations in recent years. In fact, many of China’s loans to Venezuela have been based on oil for loans agreements. Despite promises by Chavez that nationalization of Venezuela’s oil assets in 2007, which resulted in the exit of US energy companies Exxon Mobil Corp. and ConocoPhillips, signified, “the end of that era when our natural riches ended in the hands of anyone but the Venezuelan people”[4], these monumental loans required Venezuela to sell significant and increasing amounts of oil to Chinese oil companies. As a result, in 2012 Chinese state energy giant CNPC was pumping 200,000 barrels a day with plans to increase this to 800,000 barrels by 2017[5]. In other words, while allying more closely with China may have been viewed as a way towards reducing or ending dependence on the US, Venezuela’s deals with China have nevertheless also locked Venezuela into another form of debt burden, something which, as more recent events have shown, have become increasingly difficult for the country to repay.

Initially, as has been the case in many developing countries receiving Chinese loans, Chinese companies looked set to greatly benefit from the loans provided to Venezuela. Although in the case of Venezuela there has been no obligation for Venezuela to buy from China, the fact that a significant percentage of loans were denominated in RMB facilitated the likelihood. Chinese companies, such as XCMG Construction, ZTE, State Grid, Sinohydro Group gained significant infrastructure construction projects in Venezuela.

Given its own political-economic concerns (not least its oil interests), the US, which has recently placed sanctions on Venezuela and been accused by PDVSA of waging an “economic war”, has been highly critical of China’s investments in Venezuela for being damaging to the country. The Chinese government, on the other hand, maintains that its cooperation with Venezuela benefits ordinary people through contributing to the country’s socio-economic development and constitutes a “win-win” situation for both parties.[6] China has also lent money to support low cost housing projects.

While it is necessary to be cautious of US criticism of Venezuela considering its rival interests in the country, and to note how US financial institutions also hold significant amounts of Venezuelan debt (despite the sanctions prohibiting new purchases), this does not mean that debt to China is not also detrimental. Indeed, Venezuela represents another example of the dangers of amassing huge debts to China and how relationships can turn when the ability to repay that debt becomes questionable. Since oil prices began to fall in 2014, and production at Venezuelan state-owned oil Company PDVSA has fallen and Venezuela faces further economic and political crisis, Venezuela has struggled to repay its debts. In November 2017 the Venezuelan government and PDVSA were declared in default by ratings agencies as they began missing payments on their international bonds. Faced with sky rocketing hyperinflation, shortages of every day basic necessities resulting in great hardship and suffering for Venezuelan people and political instability, it may be more appropriate to question whether Chinese-Venezuelan relations now represents a lose-lose situation for all concerned.

With many of the contracts signed when oil prices were high, the oil price crash and the crisis has led to increasing difficulties for Venezuelan in meeting its oil shipment obligations under its oil for loans agreements with China as well as its other major oil backed loans creditor, Russia. In 2016 PDVS started to fall behind with these payments when it failed to supply oil worth US$750 million that year[7]. It has been questioned whether this type of oil backed lending has left Venezuela with further unsustainable debt, which in fact will only further social and humanitarian problems as government resources are directed towards servicing the debt.

In view of the deteriorating situation, Venezuela has now been classified by the Chinese Academy of Social Sciences’ Institute of World Economics and Politics as the most dangerous place for Chinese investment. Indeed, as Venezuela’s economy further deteriorates, it has led to the abandonment of Chinese backed infrastructure investment projects, such as a 462km high speed rail project costing US$7.2 billion. Despite construction of what would have been the first high speed rail in South America having already begun, the project fell behind schedule and was gradually abandoned and by 2016 former construction sites and factories had been ransacked for power generators, computers, metals, ceramics and other materials[8].

Meanwhile, the Venezuelan crisis has also impacted the overseas Chinese population living in Venezuela, with tens of thousands of what was once a population of 400,000 reportedly having returned to China in the past three years. Those who have left range from small business owners to Chinese workers, who have left for safety reasons as well as economic reasons.

Although previously China continued to be viewed as a lifeline for the country, lending to Venezuela has significantly slowed in recent years. From 2013 to the beginning of this year, Beijing has only announced investments totalling US$22 billion and some of this money has not been disbursed[9]. More recently, officials have also reportedly been indicating that no new money will be available for investment. Although in 2016 Beijing agreed to renegotiate its loans with Venezuela, which allowed it to keep up payments to bondholders, in future it might be questionable how far such help from China can be guaranteed. In what has been viewed as a sign of Beijing’s changing attitude, as Venezuela struggles to keep up with its oil repayments, on 27th November 2017 a US subsidiary of Sinopec (Sinopec USA, Inc.) filed a complaint in Houston District Court in Texas to sue PDVSA for US$23.7 million plus punitive damages over failure to pay half of an agreed US$43.5 million in payment for 45,000 tons of steel rebar supplied by Sinopec as agreed in a May 2012 contract. In the complaint Sinopec accused PDVSA and associated defendants of, “intentional misrepresentation, deceit and concealment of facts know to them” and alleges that the defendants’ conduct was either “committed with malice and intent to injure” or with “conscious indifference to a high degree of risk to Sinopec”. In this case, a settlement agreement was reached quickly two weeks later when PDVSA agreed to pay US$21.5 million in two instalments, the first on 14th December and the second on 15th January 2018.

The Venezuelan case represents a warning highlighting the shaky grounds of some of China’s most significant lending and investment arrangements and their potential vulnerability should political and economic circumstances change beyond its control. While the economic crisis in Venezuela continues to unfold, its large-scale oil debt burden to China threatens to contribute to the country’s economic woes, which are causing great hardship to the Venezuelan people. For all talk of a “win-win” situation in Chinese rhetoric, with no “win” in sight for China, the loss for Venezuela looks likely to be far worse. Indeed, the negative effects of the inability to pay debts to China have already been witnessed in other countries, such as Sri Lanka which was forced to cede majority control of the strategic Hambantota Port to China in exchange for debt relief. As Venezuela’s debts add up, signs are now emerging that China may begin to look less favourably on this country which has been viewed as an important ally. Venezuela has been left in an increasingly vulnerable situation.

[9] The Limits to Russia’s and China’s Support of Venezuela. Benjamin Gedan and Michael McCarthy. 15 January 2018. https://www.realclearworld.com/articles/2018/01/15/venezuela_maduro_chavez_russia_china_112682.html